The second week of January 2023 is packed with new releases. Fans of any genre will have something to enjoy this weekend.

On the regional content front, several films in the Tamil language will premiere on the OTT platforms owing to the Makar Sankranti weekend. On the one hand, where TV channels are used for television premieres, OTT platforms will also be taking the lead this time. Films like Mukundan Unni Associated, Laththi, Head Bush, Thattaserry Kootam, Varalaru Mukkiyam, and more will be streaming on Disney+ Hotstar, Zee5, SunNxt and other platforms.

Meanwhile, on the international content front, popular shows like Sex!fy, Vikings, Hunters, and Sky Rojo will release with its new sequels on Netflix, Amazon Prime Video and other platforms. For Bollywood buffs, the highly-acclaimed film, Drishyam 2, will be streaming on Amazon Prime Video.

New web series and movies on OTT this week

After a first successful season, the makers of the popular Polish show, Sex!fy, are back with a new season of the show which revolves around a computer science student  focused on developing an algorithm that can help women with some sexual benefits. The official premise as shared by Netflix reads, “To build an innovative sex app and win a tech competition, a sexually inexperienced student and her friends must explore the daunting world of intimacy.” In the new season, they’ll face more challenges while presenting the app and the first episode of the season begins where Natalia gets some troubling news about the app and is forced to pivot to a new idea.

Directed by Abhishek Pathak, Drishyam 2 is the sequel to the 2015-release Drishyam. The film was adapted from the 2021 Malayalam film of the same name which starred Mohanlal in the lead role. Drishyam 2 released on November 18, 2022, and received critical acclaim, eventually becoming a hit at the box office. The premise of the film revolves around the family as show in the first film. The synopsis reads, “A gripping tale of an investigation and a family which is threatened by it. Will Vijay Salgaonkar be able to protect his family this time?”

Where to Watch: Amazon Prime Video

Cast: Ajay Devgn, Tabu, and others

The One Who Steals Other’s Heart | Playflix – Malayalam Dubbed

Directed by Xu Chao, this Korean film is about a mysterious theft and investigation. The official premise of the film reads, “When Liu Feichun serves as the police commissioner of Xiangyang County, a woman in the city is killed, and her heart is stolen. Liu hurried to the crime scene and encountered Long Chongjiu, who disguised himself as a roving doctor.” The English dubbed version of the film is streaming on MX Player.

Where to Watch: Playflix (Malayalam Dubbed)

Presented as a comedy-drama, the premise of this Marathi-language film, De Dhakka 2, revolves around a strange family who becomes a part of a scam and eventually gets into trouble with the dons. The premise reads, “Mr. Makarand Jadhav, and his funnily weird family land in London but they get embroiled in the financial scam and find themselves in the hands of the Pakistani mafia. To escape this ordeal, they embark on a road trip adventure once again.”

Written by Santosh Echikam and Geo PV, the story of Anoop’s directorial, Thattaserry Koottam, revolves around Sanju, the son of a goldsmith who faces difficulties in meeting his daily earnings. Sanju has dreams; however, he has to overcome struggles to realise them. Meanwhile, Sanju falls in love with Athira, and a series of unfortunate events lead to his unpredictable changes. What follows are incidents where he has to make sure he succeeds both in love and life.

The Bengali language drama film, Mritypathojatri, is about overcoming mental struggles. The official premise of the film, presented by Kan Singh Sodha, reads, “On the specific day at the day’s end, a convict is put into the condemned cell who then will be hanged the next morning. Before he is hanged till death, he goes through certain psychological distress, loneliness, guilt and fear of death.”

The story of this popular film, Mother revolves around 27-year-old Do-joon, who, despite being an adult, is dependent on his mother for a living. He has anxiety and often behaves differently during situations, inviting danger and trouble. One night, on his way home, he encounters a girl and follows her into a dark alley, where she disappears. The next morning, she is found dead, and he is accused of her murder. However, the case gets closed quicker than usual. This bothers the mother, who is not convinced by the closure, eventually embarking on a journey to find out more about the girl’s death and to prove Do-joon’s innocence.

Revolving around the popular real-life story, the series Trial by Fire, starring eminent names, is about two parents – Neelam and Shekhar Krishnamoorthy – trying to seek justice. They lost their kids in a fire that broke out in the Uphaar cinema. While dealing with their loss, they have only become stronger in their fight for justice.

An antisocial by nature, the only aim of advocate Mukundan Unni is to become rich and to achieve his goals. He would do anything at any height. All his life, he has lived in a true, honest, and organised fashion. However, this has not proven to be beneficial. Time is ticking, and he has to fulfil his dreams, for which he tries to be aggressive. This works, and as he grows rich, the behaviour worsens as new characteristics become a part of his personality. Aspects like being competitive, petty, and more to the extent of killing someone don’t bother him. What follows are incidents where he will do whatever it takes to achieve growth, prosperity, and respect.

Where to Watch: Disney+ Hotstar

Cast: Arsha Baiju, Jagadish and others

Directed by Shoonya, the story of Head Bush revolves around the underworld in Bangalore. Based on Agni Sridhar’s Autobiography, My Days in the Underworld, the film is presented as a memoir exploring the underworld in the ’70s surrounding the lives of MP Jayaraj and a noted don who splurged money and made a mark in politics and received immense public support. The film has been presented as a Political-crime drama.

Co-written and directed by Anirban Bhattacharya, this Bengali-language supernatural comedy-drama film is about King Bhupati Ray of Ballabhpur, who is in heavy debt. He has declared bankruptcy and now decides to sell his dilapidated ancestral mansion. However, there is a ghost of an ancestor who doesn’t allow this. While the buyer is impressed and prepares to buy, keeping the heritage buildings in mind, the cursed ghost only adds more confusion. What follows are events where the royal descendant has to make ways to somehow get rid of the crumbling 400-year-old palace and get out of the crippling situation.

Where to Watch: Hoichoi

After tasting enormous success with two Bahubali special episodes on Unstoppable 2 with NBK, the team at Aha announced the upcoming guests on the show. The Sankranti special episode of the Telugu-language chat show will see the cast and crew of the upcoming movie Veer Simha Reddy. The official announcement shared by the team stated that the episode would stream on Aha Video on January 13, 2023. 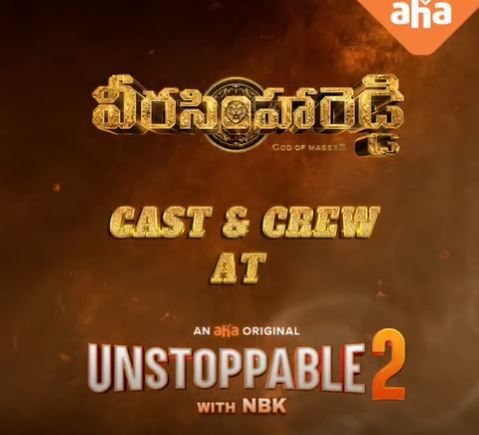 Where to Watch: Aha Video

Police constable Muruganantham was suspended from duty for harassing a girl who eventually passed away. After a few months, he returns to duty and is informed by DIG Kamal to harass another suspect as his daughter is kidnapped. He obeys the orders and does as said, only to later realise that the suspect harassed is the son of an influential don named Guna, who sends his henchmen to bring him and seek revenge. Muruganantham and his 10-year-old son Rasu escape and find a place to hide, but Rasu’s health condition worsens owing to his condition. Muruganantham has to now save them from the henchmen and also save Rasu’s life.

Cast: Vishal, Sunainaa, and others

Presented as a Tamil Rom-Com, Varalaru Mukkiyam, written and directed by Santhosh Rajan, the story of the film revolves around Karthik who dreams of becoming famous. He falls in love with his new neighbour, who does not reciprocate the same way. Meanwhile, her sister falls for him only inviting more confusion in the brewing romance. What follows are incidents that bring more troubles to his dream and journey to impress his darling!